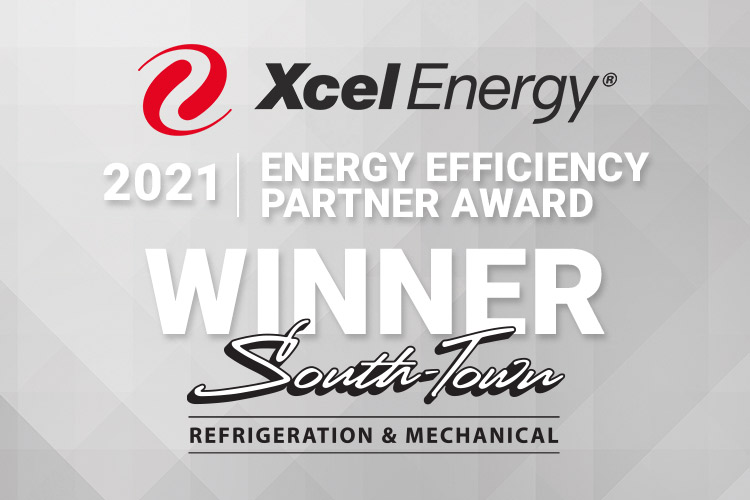 Being the preeminent provider of commercial refrigeration, HVAC, and systems integration services sounds like a tall order. But South-Town Refrigeration & Mechanical does this every day. Recently, South-Town was awarded for efficiency by Xcel Energy®. Keep reading to learn more about this honor and South-Town’s energy saving capabilities.

The honor is granted to selected trade partners who utilized Xcel’s rebate programs throughout Minnesota. That program is designed to help customers save energy and learn about efficiency with better-performing equipment.

As a 2021 Energy Efficiency Partner Award winner, South-Town’s efforts contributed to more than $8.8 million in rebates, collectively. In addition, companies that took part in the Energy Efficiency Program helped save more than 68,695.40 dekatherms of natural gas and 70,315,946.00 kilowatt hours of electricity.

“I think there were a handful of projects that I’m aware of,” Seim said, “and they all dealt with energy efficiency.” But one project in particular stood out as the heavy hitter for energy savings across the board.

“There was one project with Lakewinds Food Co-Op in Chanhassen,” Seim explained. “We came in and pretty much replaced every case in the store and gave them more efficient equipment – LED lights, ECM (high-efficiency) fan motors, night curtains. Things like that,” he said.

The store improvements aim to create a better shopping experience for customers while also helping the environment. Renovations include:

These upgrades will significantly reduce energy costs. But that’s not all South-Town did for Lakewinds Food Co-Op.

“We replaced all the frozen food cases because they were the original cases from when the store was built,” Seim added. All told, this Lakewinds project was “the biggest project that I’m aware of that was part of the Xcel Energy rebate program,” he said.

Service Sales and Account Manager Ryan Engmark provided details on two additional South-Town projects, both of which contributed to energy savings for the clients and acclaim from Xcel.

At the MGM Wine & Spirits, South-Town’s work brought this long-running chain’s Bloomington West location up to date with lighting and doors. “They had glass walk-in cooler doors with fluorescent lighting that were more than 25 years old,” Engmark explained. “We removed those and installed 18 new, energy efficient doors with LED lighting.”

That project alone, Engmark noted, awarded the client with a $1,800 rebate from Xcel.

“We removed the existing refrigeration equipment and installed new, energy efficient evaporators with EC motors and a condensing unit for the walk-in beer cooler,” Engmark said. For this project, Xcel awarded a $4,386 rebate.

In addition, South-Town removed 22 glass doors with fluorescent lighting, Engmark said, and replaced them with the same number of new, energy efficient doors equipped with LED lighting. This netted Central Avenue Liquors an extra $8,653 in rebates from Xcel Energy.

When determining how to help a store save energy and run more efficiently, Seim said he often provides a few options for refrigeration.

“We’ll lay out the good, better, and best scenarios and show anticipated energy savings,” he explained. “The ‘good’ option will be the baseline. The ‘better’ has a little more incentive, and the ‘best’ would be the full Cadillac.”

And going all in, he said, makes the most sense in the long run.

“If you’re going to invest a great amount of money, why not also think about what’s going to save you money as well?” he said. “Historically, when we show people the ‘best’ option, that’s the one they’ve taken.”

Family owned and operated since 1954, South-Town Refrigeration & Mechanical customizes refrigeration, HVAC, and building automation services to your specific needs. Awarded for efficiency by Xcel Energy, South-Town proves to be a force with its energy management systems. Learn more about the services and equipment offered and how South-Town can help with your next project. Contact us today. 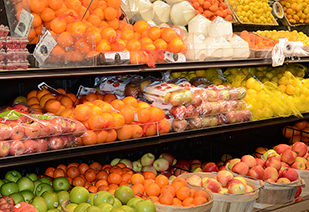 Energy costs. Shopping experience. Product quality and freshness. For the grocery and convenience store owner or professional, these are three things constantly on your mind.